Tamarind fruit is obtained from Tamarind, a leguminous tree indigenous to tropical Africa. The fruits are found in bean-like pods, dark brown in color, and they have a tart or sour taste. The fruits are edible in their raw nature, but can be further processed into other end products such as tamarind sauce, tamarind paste, tamarind candies and tamarind juice. Though it has its origin in Africa, tamarind has found a home in Southeast Asia and India where it is used in the preparation of tamarind paste – a crucial ingredient in most of the southeast Asia cuisines.

Where to Find Tamarind Fruit

Ripe tamarind fruits can stay for a long time at room temperatures without the need for any form of preservation. The fact that they are sour in taste acts as a natural defense for a number of bacteria that would be interested in attacking the fruits thus making them go bad. Unless exposed to dump conditions, the fruits can stay for relatively longer compared to other kinds of fruits. 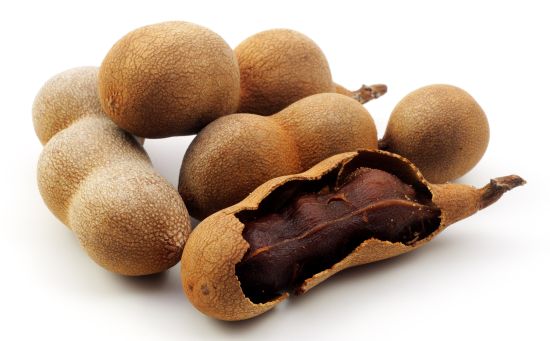 You can get raw and fresh tamarind fruit from tamarind trees grown in several places around the world. However, if you don’t have such trees around, you can find tamarind packed in special packages at the local supermarket but especially in specialty food stores dealing in Asian and Indian foods.
In addition to the raw tamarind fruit, you can also find tamarind pulp in the stores. Tamarind pulp is made by removing seeds from the tamarind fruits then compressing the fruit mass together to form the pulp. Both the pulp and the fruit can be used for making tamarind sauces, juices, and concentrates or pastes.

It is believed that tamarind originated from the East Africa region, before spreading to Asia, India, and South America. Currently, the fruit has been naturalized in several places across the globe including the Philippines, the Pacific Islands, Malaysia, Indonesia, Myanmar, and Thailand in the ASEAN regions with Thailand having the largest commercial fields of the trees.
The fruit is also cultivated widely in India, with specific references to the South Indian state of Andhra Pradesh, Maharashtra Karnataka, and Tamil Nadu where it is believed that over 300,000 tones of tamarind fruits are harvested each year.
In the United States, the fruit is mainly found in the southern states due to the tropical and semi-tropical climates that prevail in such areas. But the bulk of tamarind fruit and tamarind fruit products consumed in the United States are imported from regions where the fruit is grown on a large scale, especially from India.

Tamarind fruit pulp is edible, with the young green fruit being too sour for many people but it’s always a crucial component in most of the savory dishes. The ripened one, on the other hand, are more palatable and are less sour when they are fully ripe.
The fruit can be separated from the seeds and compressed to make tamarind pulp, which can then be used in the preparation of tamarind paste or concentrates. Additionally, the pulp, as well as the ripened tamarind fruits, can be used to prepare homemade tamarind sauce if you don’t want to purchase the already manufactured sauces from the stores.
Tamarind fruit is also used to make tamarind candies and tamarind juice, which is extremely refreshing should you find the right type of fresh fruits.

Tamarind is not just an excellent ingredient cherished by the Southeast Asians and Indians for making savory meals. Beneath the sourness of the fruit, there are a plethora of health benefits. Comprehensive studies have revealed a wide range of health benefits that one can get by taking tamarind fruit or using the various tamarind products on a regular basis. Some of them include the following-:
Aids in Digestion – tamarind contain high amounts of dietary fiber and is also considered a natural laxative. With such properties, it helps in increasing the efficiency of the digestive system thus aiding in digestion. Tamarind has a bilious substance which stimulates the production of bile, making ingested foods be broken down faster to ease the digestion process.
Improves the immune system – Tamarind is rich in vitamin C and other antioxidants which are instrumental in boosting the immune system and ensuring that the body is safe from a wide range of infections. Also by being a natural antiseptic, it helps in reducing the number of parasites in the body due to its antimicrobial effects.
Anti inflammatory – tamarind has essential oils believed to have anti-inflammatory effects, thus helps to bring relief to joint pains, arthritis, gout and rheumatic conditions. This is why tamarind is used as herbal remedy for most of such conditions.
Tamarind and weight loss – tamarind has hydroxy citric acid. This acid slows weight gain by inhibiting body enzymes from storing fat. Additionally, tamarind is a natural appetite suppressant. Hence, it reduces the chances of binging, further helping in weight management.